Is life one big game? Some say that it is, it certainly is a common statement I hear from others. Our life choices whether we care or not what others think, affect the people we love the most. Life for The Berrys was not so terrible over the summer like it has been in past summers due to Jack’s choices. Sure, there are everyday troubles or inconveniences here & there, but those that follow our journey with Jack, know that things have been relatively calm behavior-wise. As the old saying goes, there is a calm before the storm. Dealing with a lack of sleep is manageable. Coping with running around to restaurant after restaurant everyday to get food for Jack is deal-able. However, dealing with people that try to pull the wool over Jack’s eyes infuriates me, scares me, & potentially threatens our financial security as a family. Scammers trying to prey on Jack’s disabilities is nothing new to us. Over the last week, we have noticed Jack becoming more withdrawn, wearing headphones more often, closing his door which he hasn’t done any of this in a long while. Life this summer for Jack has really been all about games on his phone & that was so refreshing to us, such a much needed breather. We really enjoyed our summer of “freedom”, but it all came to a head too soon.

The only time I can safely look at Jack’s phone is when he goes to sleep. Sleep has been a fleeting situation here lately for Jack so I haven’t been able to do much investigating until the last few days. Jack is back to searching for a wife or a bride as he calls her. He has no idea that most of the time, his searches lead to a male (more than likely) in another country. After he went to bed a few nights ago, I started my other job as a private investigator. Upon my digging, I found conversations between Jack & “Diane”, ironic given that one of Jack’s favorite songs & mine as well is Jack & Diane. Diane asked Jack to download CashApp which is an app on a phone to send people money through. When Jack responded that he didn’t have any money to put on it, “she” said it didn’t matter, only wanted the pin for the CashApp. I’m not criminally-minded enough to know what this person could do with a pin for a cash app without any money tied to it, maybe some of you could help me with insight on this. She also wanted pictures of our house, told Jack she was coming to see him but needed gas money to get here, wanted gift cards for gas. She sent risqué pictures of herself with many promises, one to become his bride. He also called the bank & this is a hallelujah praise moment to small towns & wonderful friends, Jack wanted to start a checking account. Our friends there called me right away with an alert. They referred Jack to talk to me or Lee. When this stuff starts happening, I worry myself sick wondering what I can do to break the spell these idiots have on Jack. I asked my sister’s fiancé to call Jack with his deep voice & impersonate the police. He did & I think it frightened Jack a little, but sadly, Lee had to go purchase an eBay card for another person that was claiming to come marry Jack the next day. I’ve had to hide all of our checking account information, any bills with personal info, basically my whole life is under my bed! Have you ever seen those commercials for LifeLock? Well, we need that. I’m terrified someone is going to hack our entire home. Not only did “Diane” message Jack, she also messaged me & a few other people in Jack’s contact list asking for money. How she got their numbers, I don’t know. She even wanted to know our phone carrier, which has made me super nervous. I know Jack did not give her these people numbers so how did she get them? If anyone has any advice on this, send your comments my way. 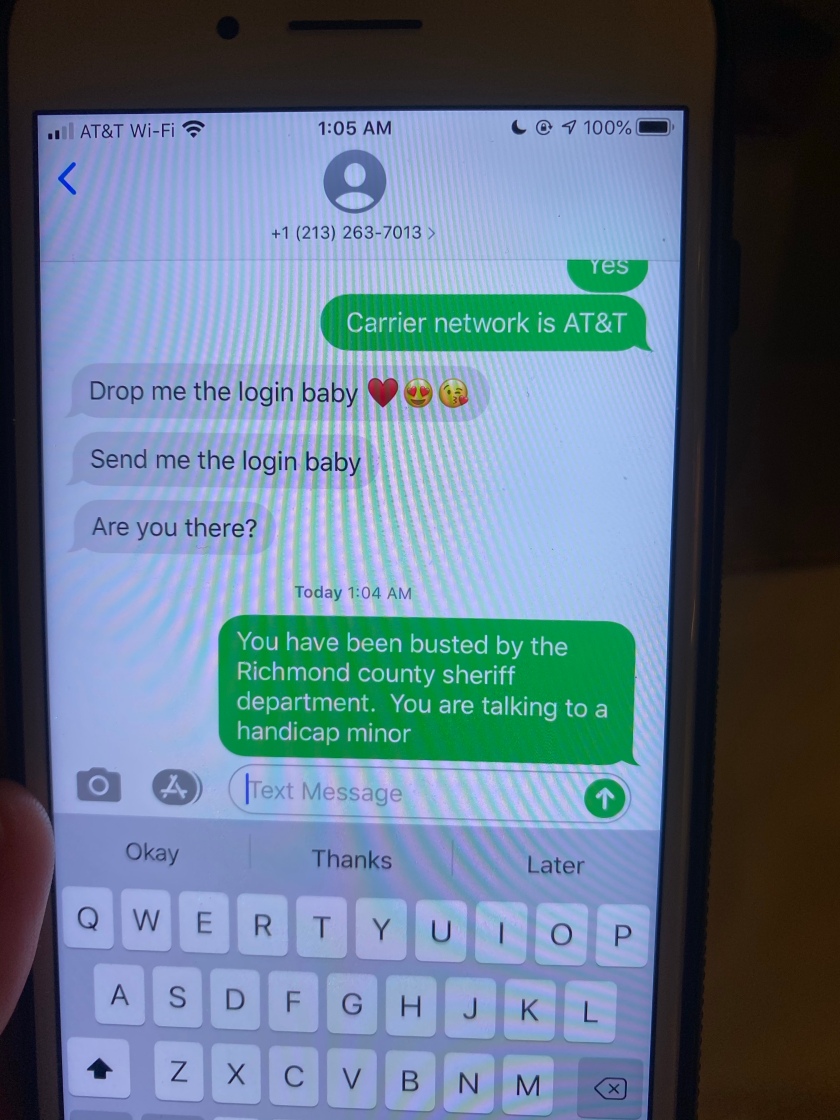 The last text was from me after Jack went to sleep that night. “Diane” is in gray, Jack in green. It’s so sickening that everywhere he turns, there is someone nearby scamming him. He has been conned out of thousands of dollars of our hard-earned money, & let me tell ya, our money is literally earned through blood, sweat, & tears-lots of sweat! After three years of going through this with different “women”, not one has yet to come see Jack, but yet he still wants to send them money. Taking his phone away is not an option. Talking to Jack about these people is not option because he doesn’t care nor listen, only he knows what is best. Our hands are tied. We live in a totally scary situation in which we have no out. Please pray for Jack to get away from these people & that these low-life scammers will vanish from his life. To Jack, life is one big game. It’s always been about who wins for him & no one is winning but the scammers in this case. And feel free to harass this person on the number featured in the picture!