We’ve been living in quarantine for several years now, Covid-19 quarantine has not been difficult for us really at all outside of not being able to eat out & escape the wrath of Jack in the evenings. The same challenges we are facing now are the same challenges we face on a daily basis with Jack all year long without Corona with one exception-there is a possibility of one or all of us contracting Covid-19. I haven’t let Corona worry me too much. I avoid all media so my mind won’t be infiltrated with Covid-19 thoughts. In the back of my mind though, I keep thinking about a young life that was taken due to Corona, a fellow Dravet child. She was 13 years old. Like all Dravet patients, each one suffers from a compromised immune system. Many develop pneumonia from a simple cold or from aspirating during a seizure which is what happened with Jack a few years ago. He complained of a headache one night & six hours later we were on an ambulance to Chapel Hill (worse ride of my life, it was like riding in a John boat during a category 1 hurricane). We had no idea what was wrong with him. He had a high temperature & kept convulsing. We thought we were going to lose him, it was a touch & go situation for a while. When the doctors said pneumonia I was like, no, he wasn’t sick!

Of course any life taken during any situation is sad, but this really hits home when it is one of our own is taken from Corona. It makes the reality of Covid-19 more real, less sci-fi. So to curtail overwhelming thoughts about this pandemic, I listen to happy, upbeat beach music, relax & unwind in the evenings when possible with Real Housewives of whatever, & protect myself as best I can when out in public. But there is no protecting myself from Jack himself. He goes through cycles of behaviors, most unwanted. When he’s good, he’s great, when he’s bad, he stays that way until the next good wave rides in. He’s currently riding a tidal wave & that wave often comes crushing down on me solely which then creates a tsaumi effect on other people making me short & irritable with everyone else, especially the ones closest to me. This is an unfortunate side effect of Dravet or from being a caregiver in general that is not listed under side effects. This past morning, Jack held one of his plastic Power Ranger swords up to my throat thinking he was being funny. He was trembling he was pressing the sword so hard in my throat. This is why I was such an illbox on that day, the lady that complained about the price of my chocolate covered strawberries needs to count her blessings that I was not there to give her a tongue lashing! Not only was my carotid threatened, but Jack wouldn’t stop hitting me either. He literally has karate chopped my butt every morning for two weeks now, follows me around the house hitting me each morning. His sleep is screwed up, which makes for poor behavior as well. Not only that, he messaged a friend of ours & asked her some pretty obscene things the other day. How embarrassing! Just a few days ago a Dravet Mama asked on the Dravet Facebook page was there anything to do for your child that hits you all the time? The answers were all the same mostly, no was the unanimous response, it’s part of Dravet. What a terrible disease to have. He can’t control himself & it’s heart-breaking knowing that there is no medication to help ease the worst side effect of Dravet Syndrome.

Here it is 1am as I work on this blog & the power is out…again. I’ve written more blogs about power outages than anyone ever! Being out of power is nothing anyone wants to be without when Jack is awake. This time it was a scheduled outage, they did call to say repairs were going to be going on. The house is completely dark, Jack & myself are the only ones awake. I scurry into his room to move the 25 objects he has collected throughout the day off his bed in hopes that he will nod off since the power is out. Of course no such luck, he uses this time to sing to the top of his lungs. Sleeping pill was given at 10:20pm, nearly three hours later, he’s still awake.

Mornings are so very tough with Jack. The torture he inflicts on me & now Ava that she is an online homeschooler truly causes us an overwhelming amount distress. I don’t allow him to mess with Ava, she stays in her room when he is like that, which is another cause of worry in itself. I want this part of my life to vanish. The trauma of dealing with Jack’s abuse every single morning makes regular, ordinary day stuff 10,000 times more difficult to deal with. How long can ones mental strength last before the band breaks? I seriously envision myself in a mental institution for having a nervous breakdown one day but I keep reminding myself that too many other people depend on me to not go insane! And if I snap, it’s going to be over something silly, not the major stuff like Jack’s abuse. Running away is truly my only daydream. I can’t do simple things like trim my nails, brush my teeth, even wash dishes. He takes me away from normal life stuff. By the time evening rolls around, I am too mentally exhausted to give two cents about my nails or the dishes. I had one of his helpers come to the house earlier than usual on Saturday because Saturday’s are busy days at the Berry Patch. I was hoping he would stay in his room with her while I got ready & could scoot out a little early. No, this could not be done. He started hitting on his helper, rather hard, too. Plans were ruined, the day was ruined. I couldn’t leave at 11 as I had planned. I won’t plan for that again. I would rather he hit on me than anyone else. This is such a frustrating situation.

Recruiting family members to call Jack in the mornings & talking as long as possible to him are my only options outside of using chloroform! There is a meme floating around now that parents are homeschooling due to Corona about using chloroform as a science experiment on your children & it reminds me of my Aunt Sue (mama’s sister) to a tee! She was watching the kids one evening for us while we went to a funeral around the corner from our house. My phone started ringing off the hook, it was Sue screaming for me to come home. The kids were ages 11, 10, & 5. Jack had one of his violent outbursts, Sue couldn’t get him to calm down for anything. When we returned, she was upset, naturally so & crying as was I. Sue was always so funny & never meant to be. She said something so hilarious that broke the woe is me spell. She said “he needs chloroform”! I died laughing over that then & still do to this very day. The funny thing is she meant it & so do I! With that being said, y’all got any chloroform I can borrow? 💜 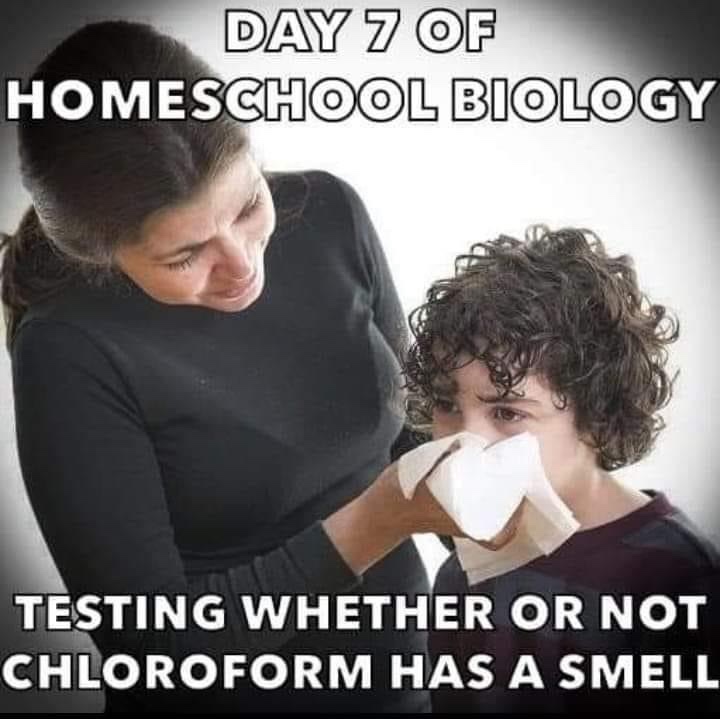 2 thoughts on “Chloroform? Anyone?”