I am no stranger to these walls. Our local emergency room was home for us many nights, especially when Jack was younger. Jack’s last visit in December 2017 was in fact in this very room where my Daddy lay a few nights ago. 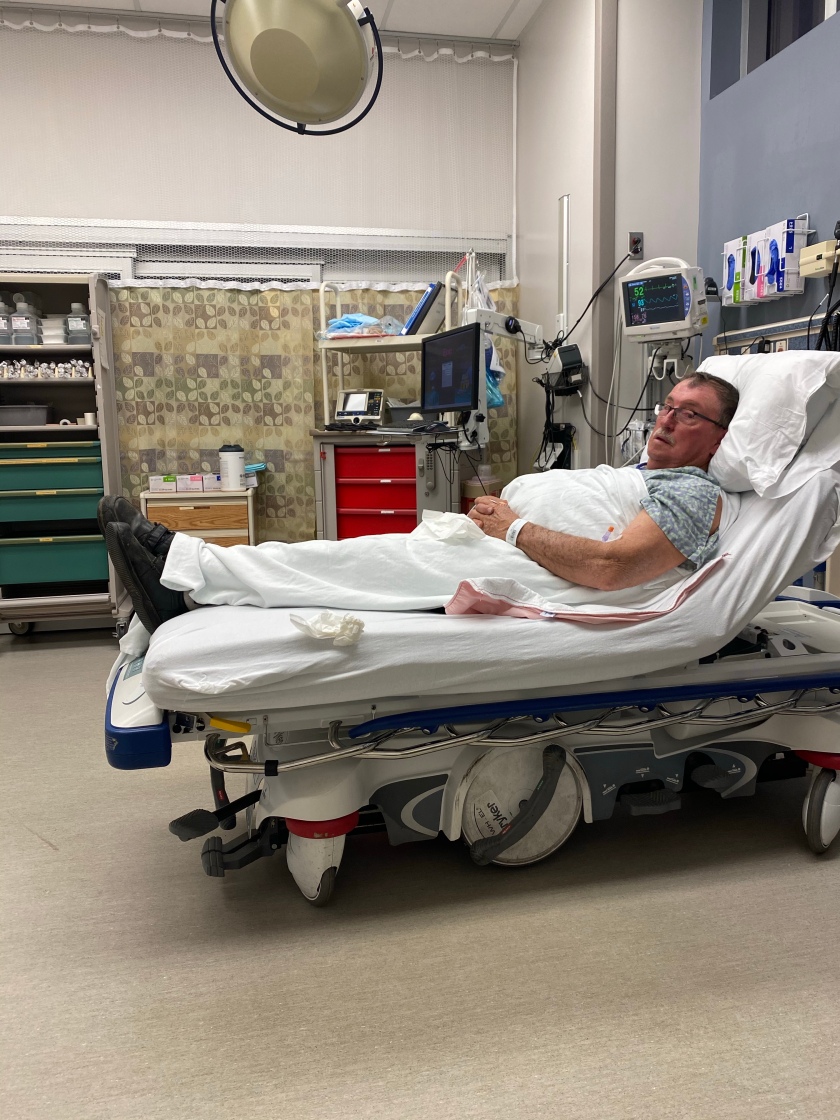 Daddy is 75 & works hard. He started out his day helping Lee. They are doing some renovations on the farm market part of The Berry Patch. We are trying to become more efficient with our work spaces due to growing business that we are so thankful for. Afterwards, Daddy went home to cut wood. He & my Aunt (both live on family land) both have wood stoves that they heat their homes with. Daddy has been cutting wood his whole life. Later on that evening, he & Mama were eating supper & Daddy’s words were slurred. He was asking Mama a question & it didn’t come out plain. Suspicious of a stroke, Mama quickly asked him to smile, touch his noise with his finger, other skills that are recommended if a stroke is suspected. He did all of those fine, so Mama checked his blood pressure. It was in the low 200’s, which is not low at all. After the brief slurred speech spell, Mama decided to continue monitoring his blood pressure. It didn’t take her long to decide take him to the ER because the blood pressure monitor would not even register his blood pressure due to it being so high. Upon arrival at our local ER, Daddy was quickly taken back & received excellent attention at FirstHealth Richmond Memorial ER department. Daddy passed all tests, but his BP was at a steady climb, the doctors decided to keep him for monitoring. The highest read I saw was 237/77. Daddy is continuing to do well, his speech hasn’t slurred any more thus far. He is still an inpatient due to further digging into what could of caused what they are thinking a mini stroke.

Of course in full Amy fashion, while I was waiting at one of the longest cycling stoplights in our county, a man I recognized from seeing around town approached my car. He was asking me questions & getting agitated. He is a known troublemaker & I’ve seen him arrested on several occasions. I wasn’t scared because my doors were locked & my windows were up, I just know it was fitting for the crisis. My crises are never stand alone issues, they are always pieces of the puzzle that don’t seem to fit but oddly do in my mind because that’s just the circumstances that surround my life. I was so thankful when that stoplight finally turned green!

The last time Jack was in the ER, our visit there was due to one of his most volatile attacks ever. That visit required EMS & the police. I wrote a blog about that whole ordeal back in December 2017. https://cruelandunusualcircumstances.com/2017/12/08/current-status/

That ER visit transitioned into a several day stay in the PICU at Chapel Hill. Mentally, not only was Jack suffering, we all were. There were two stark differences in Daddy’s & Jack’s situations even though they were in the same ER room. Daddy was nervous about what was happening to him as were we, Jack was in a fitful rage. All I could think about when Daddy was in that room were all the different times Jack & I had been in that very room whether for rages, but mostly for long, convulsive seizures. The last time he was there, Jack was about three weeks off a medication we had waited nearly his whole life for, Epidiolex which is medical marijuana. Jack was involved in a trial through Chapel Hill. We always thought this would be his saving grace, it was not. The medicine (yes, it was actual medication), brought on side effects we never thought we would have to deal with on top of everything else. It opened him up cognitively but in a bad way, he was introduced to chat rooms during that time. He stopped eating, drinking, lost 25% of his already waif thin body, stopped urinating, worsening of seizures, stopped sleeping totally, terrible explosive behaviors, stopped bathing & brushing his teeth. All of these side effects were a possibility, but the medical team did not do a thorough job in explaining the possible interactions between the medical marijuana & the seizure medications he was already on. That was a recipe for disaster & a disaster it was. He was completely weaned from that potion & other seizure medications & sleeping meds became part of an already long list. Our hopes for a calmer future with Jack from the Epidiolex were crushed. I will say that it has worked beautifully in many Dravet patients, but a lot have had experiences similar to the one we had. You don’t ever know until you try, I am thankful we did, but we will never participate in another drug trial with Jack ever, ever again. Jack hadn’t had a rage in about two years prior to starting the trial. Makes me wonder.

Ava had to take over in my absence the evening Daddy went to the ER. Jack’s newest obsession food-wise is now fried chicken. Specifically, Bojangles fried chicken. I’m not talking about a chicken leg or two for supper, I’m talking about the whole dang chicken practically! That chicken is expensive if he’s eating that much. Well, I was at Walmart in the deli section & bought two boxes of their fried chicken because Jack wanted more. The Bojangles chicken boxes come with biscuits & no one eats those so it was such a waste & an expense, & Walmart is much cheaper. Let me tell y’all, Walmart’s fried chicken is the absolute best chicken ever. It is not greasy at all, it’s actually dry but that’s a good thing when it comes to fried bird in my opinion. That skin is so crispy, to die for! This is not good for me either, I walk by the chicken & have to pick off the crispy bits because it’s so good-I’m going to be big as a barn! No more egg & bacon sandwiches for now, he eats strictly fried chicken! So I fooled Jack into thinking that chicken was from Bojangles. He has eaten chicken from one end of the house to the other, crumbs are everywhere all the time. Jack FaceTimed me while I was in the ER with Daddy to have me call Ava (they were both home together) & have her vacuum the chicken crumbs out of his bed. Her response was, “he’s the master, so I guess I better” (funny/not funny). She had to straighten the kitchen & do Mama things. That always takes me back to when Ava was 4. I was hanging out clothes & was in the backyard with me. Ava comes up to me & says “Mama, I don’t want to be a Mama when I grow up, it’s too hard”! That made me laugh & made me sad, too. She recognized all of my stress at the young age of 4. Ava’s aspirations are to be a PA when she grows up. She’s so interested in health stuff, but she was really enjoying Daddy’s hospital bed while he was out for testing. 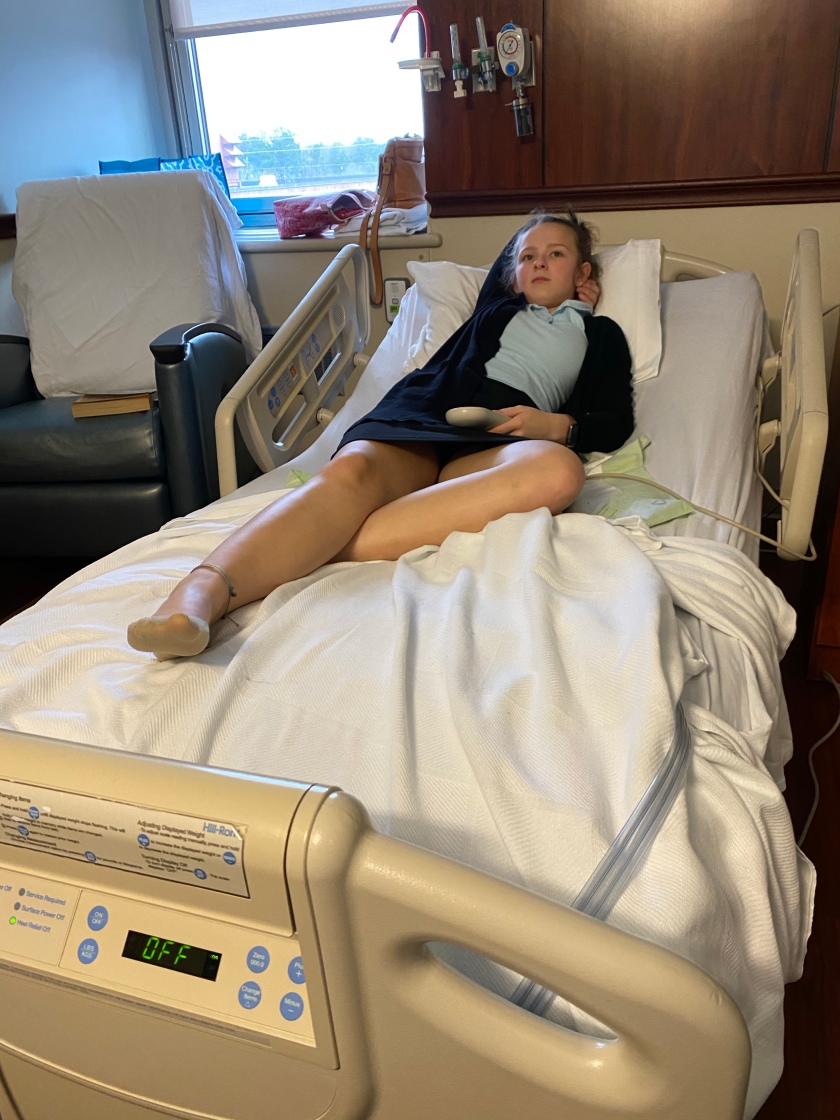 As if that wasn’t enough, as I was walking out the door to the ER, Lee started drinking. Drinking colonoscopy prep that is. Ava really was in for a treat of Mom-life. With Lee busy on the toilet, she had no choice! I took Lee for his test the next day, five small polyps were found, hopefully all will be well. 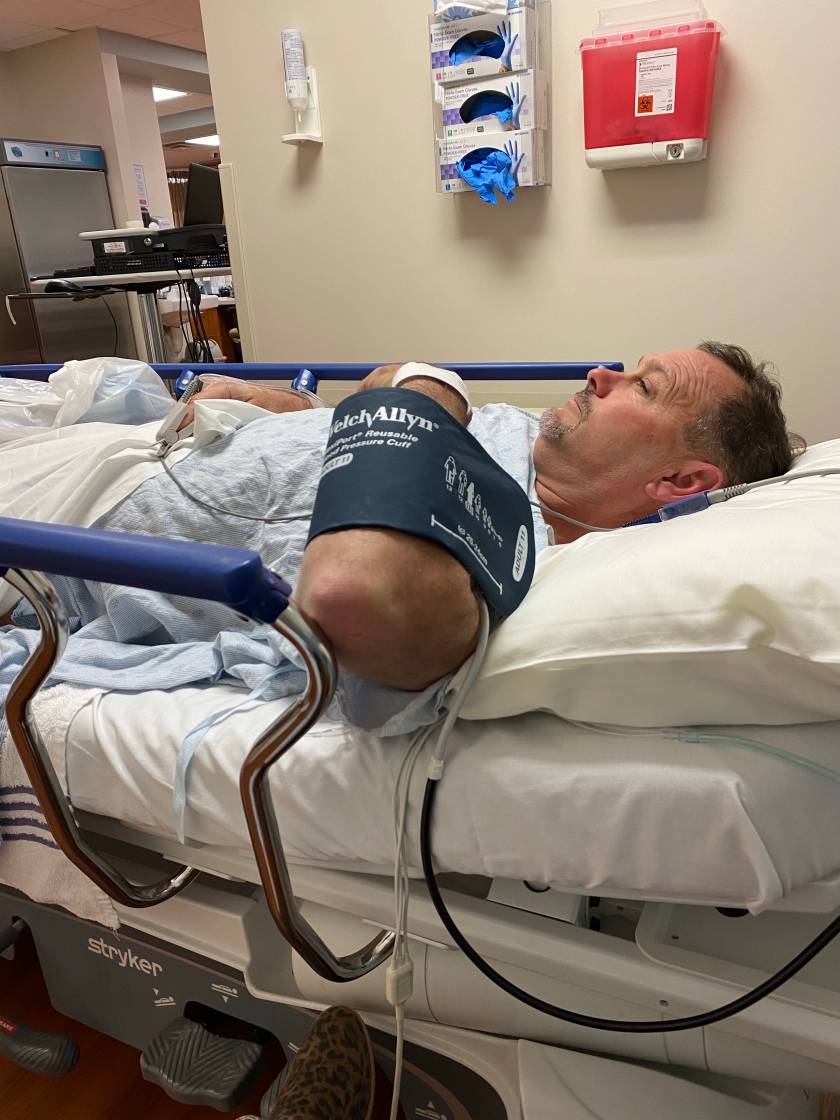 Although I am accustomed to stressful times such as ER visits, it never gets easier to stomach them, especially when it’s your parents. We are hopeful a cause can be found & these types of events can be prevented in the future. Meanwhile, I have to wonder why they keep the “I” & “O” side by side on keyboards. They drive me crazy, when I mean to type the word “in”, it types “on” & vice versa. Guess the inventor of the “qwerty” typing style couldn’t of foreseen we would be typing with two thumbs 99% of the time on buttons smaller than a chicklet! Until next time & the next crisis.