Dear Aunt Sue was one of the funniest people I knew. She was hilarious & didn’t even know it. She had us rolling on the floor laughing all the time with her funny sayings, quotes, & talking about her love for smoking, cussing, coffee, Pepsi, Nabs, & Jesus. Sue could be praising God one minute & the next, she’d flat cuss you out. Don’t get me wrong, she absolutely loved God, she just cussed a little (or a lot). Sue is my Mama’s sister, full name Linda Sue Coleman Coleman. Yes, that’s right. She was a double Coleman. She was a Coleman by birthright, married a Coleman (not related) by choice. Born in the early 1940’s, she & the rest of her siblings grew up on Mill Hill in East Rockingham. Both parents worked in mills when that was once a thriving industry. There were seven kids, one still standing which is my Mama. In 2013, Sue’s thigh was giving her a fit. She went to our local ER thinking her thigh bone was broke. It was, but sadly she had a cancerous mass on her thigh bone that caused the break. Sue quickly had surgery on her leg with a rod inserted to correct break & the mass removed, but opted not to treat the cancer because of the side effects of chemo & radiation. One of the main reasons she didn’t want to have treatment was because of sickness that comes with those treatments & the loss of hair. Hair was everything to Sue. The bigger the hair, the better. She had a large collection of Toni Poni’s. A Toni Poni is a clip-on hairpiece that looks like a ponytail. There are pictures of nearly everyone of us with Sue’s Toni Poni’s clipped in our heads. Sue didn’t last long, in 2014, she passed away. We lost a legend that day. 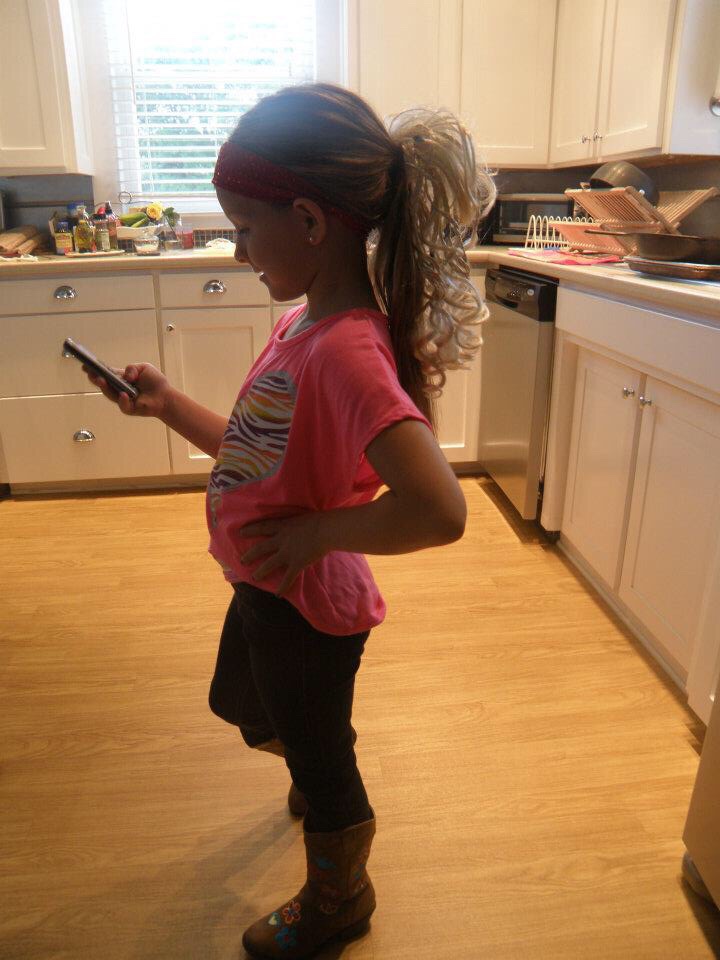 Ava with a Toni Poni. 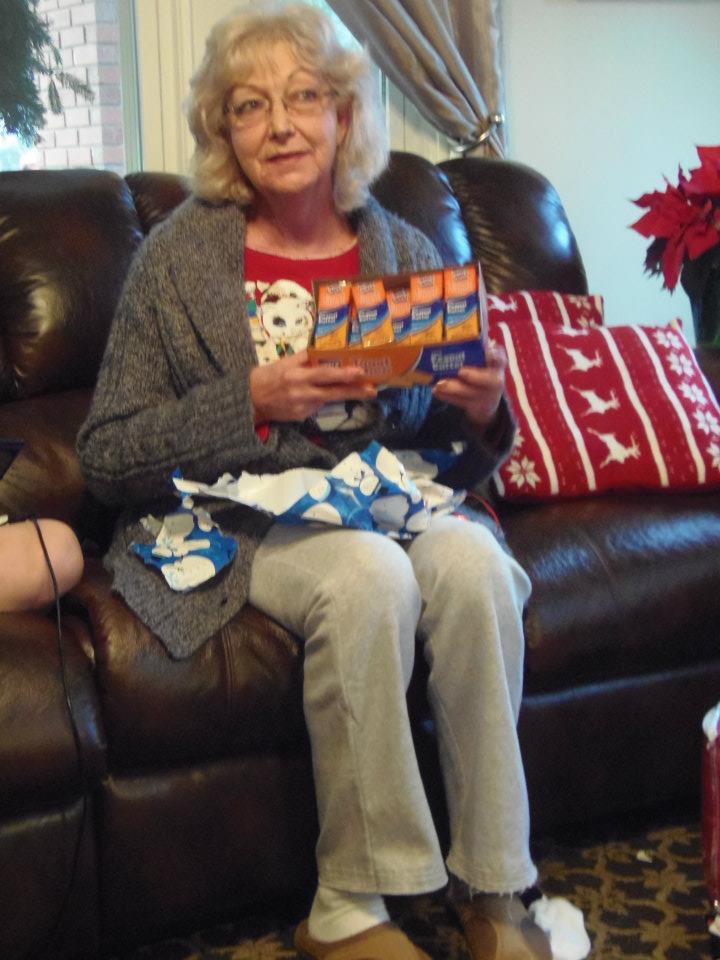 This is Sue posing with her gift of Nabs for Christmas.

What prompted me to write about Sue, is our Directv has been out multiple times in the last few months. Not because of weather issues nor sticks or debris around our satellite like they make you want to believe either. The piece of crap just can’t keep a signal for some reason. Lee brought home the ladder during one of our outages to clean & polish the blooming thing & still no luck (the ladder is still there btw, wonder what trick I can use to get him to move it). You know as well as I, trying to get a human on the phone is about impossible. Trying to get a human that works for Directv or AT&T or whatever they are referring to themselves now is like actually trying to call the director of the FBI. We’ve had Directv for 20 years & never had an issue until recently. When Aunt Sue was living, we gifted her with paid for Directv. She helped us so much with the kids, that was a small thank you to her. I was so proud that Sue would not have the burden of not having a monthly cable bill!

Sue lived just two houses down from us. The kids could walk to her house at any time. I remember Coleman & Ava coming back home after a visit at Sue’s one afternoon saying Sue was gonna shoot the Directv people! This sort of talk was everyday language for us, nothing out of the ordinary, Sue was always going to shoot someone or cuss someone out (which she did that all the time). Obviously, she never did shoot anyone, probably only fired her gun one or twice for practice. Curious as to why the threat on Directv, I called Sue to find out the scoop. She couldn’t get a human on the line & they didn’t come out to her house like they said they were to install her equipment. I now understand Sue’s feelings towards Directv. After three calls just this afternoon trying to connect with a human body, I too, wanted to reach for my pistol & blow my debris-free satellite off the rooftop! Why do these knuckleheads make customer service so very difficult? You go through all of the time wasting steps & energy answering questions with some automated heifer only to be asked the very same questions yet again by a human if you’re ever so fortunate for one to pick up the telephone.

After assuring the technician my satellite was sparkling clean & the sun has shined for 14 days straight, she made another appointment for someone to come out tomorrow to install a brand new, sparkling clean satellite. The customer service rep I was talking to asked when our call was nearing its end, do you have internet service? Why yes I do I replied. Well, she says, you can watch tv on your mobile device through our Directv app. I’m sorry, not happening! I do not want to watch Southern Charm or Real Housewives of any county, city, or state on a device the size of a notecard. I’m old, I want to watch plain old fashion tv. I want to sit down in my recliner when I’m able to sit down, partake in trashy tv, fast forward through the commercials, & call my Mama or Aunt Dot & tell them they need to turn it to QVC. Is that too much to ask Directv? We had to go four days without tv last week because of the same issue & someone “supposedly” fixed it. I feel like I am reliving my youth during the 1989 Hurricane Hugo outage. I’ve written a blog about this before, here’s a quick refresher for ya. Hugo went through our area, we didn’t have power for weeks. Water ran on well, generator ran from 5pm-10pm so we could cook, clean, bathe, watch 30 minutes of Dan Rather, & go to bed. We survived, we didn’t have any choice. Meanwhile, my school friends all had power, telephone service, cable. Here we were with nothing to do but read the newspaper, listen to the loud hum of the generator, & inhale the diesel fumes. We’d hear through the grapevine that so & so across the creek got power back today, maybe we’ll be next. We were never next, always last. That’s what Directv has taken me back to, but those weren’t bad times only inconveniences. Those power outages that we became all to use to are now precious memories. Although it is aggravating, it really wouldn’t matter if I never got to watch tv again, but I bet my Aunt Sue would still want to shoot Directv for me! 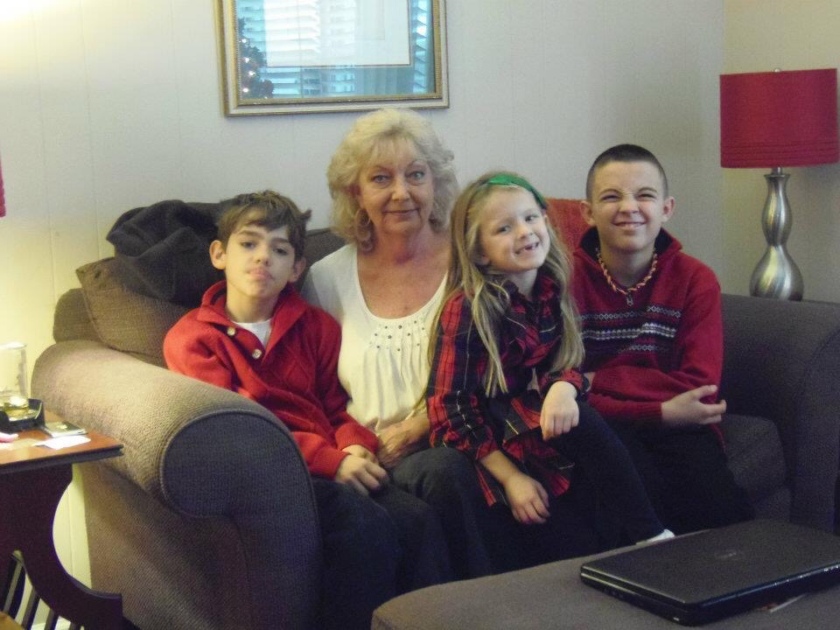 Sue with the kids at Christmas.

Side note: please do not write to me telling me this was an inappropriate blog, you’ll be blocked, deleted, & publicly ignored! This was all in fun, I’d never shoot anyone, unless of course they deserved it! 🤣