Life is tough, that’s a statement most of us say, think, or hear daily. It’s something reiterated to our kids when they don’t get their way or a friend betrays them, it’s what the boss says when you’re needed to pull an extra shift. It’s what we think when vacation plans fall through-all these examples are based solely on personal experiences & probably yours as well. This is a statement I utter inside my head more than once a day. Why is life so tough, why is it tougher for others, why does it seem like a black cloud follows certain people more-so than others. When Jack is at his worse or even his best, I walk around like Nancy Kerrigan when Tonya Hardings people attacked Nancy during the ’94 Olympics screaming “why, why, why?” At Jack’s best, we are still limited. Limited because I can’t get to the post office before it closes on Saturdays, limited because I can’t cook breakfast for my family because he’s still asleep at 10am & no one wants to poke the bear before need be, limited because every move I make centers around this one human being that has so much control over myself & our family, & limited because of the person I’ve become.

The person I’ve become is not the person I thought I would be. I was a happy person back in the day, now I am a shell of that person. I once heard a neurosurgeon on PBS explain how trauma & stress change people. The doctor said that it changes the chemistry in the brain, it changes the way we think, the way we feel, the way we react to situations. I can concur with that. The repeated stress of Jack’s situation has done all of those things to Lee, myself, Coleman & Ava. Our smiles don’t reach our eyes any more, our hearts are filled with negativity & the looming thought of what Jack is going to do next.

I used to never worry. Taking the days as they came, making plans. Now, that’s all we do is worry because Jack gets involved in so much foolishness. Every knife, pair of scissors, lighter, & razor in our home are hidden. Can you imagine living a life like that? Where you can’t go to your kitchen junk drawer & reach for a pair scissors to cut a tag off something. I keep mace & wasp spray hidden in the house in case I have to use it on our own son. Nothing is easy for our family. I’ve learned before Jack is placed in a group home that he has to have psychological testing. That means I’ve got to take him to our local behavioral healthcare facility for this. How is this going to be possible when he won’t even go for a checkup at a regular doctors office, plus, if he goes, what am I going to tell him it’s for. Not only that, the office can’t see him until June & that’s for the initial appointment. If I get him there once, I’ll never be able to again. I left a message for the provider, hopefully she will understand the situation & do everything in one visit. It’s a double-edged sword every time we turn around.

I was the girl that exercised everyday. At one time, I was the nut that woke up at 6am on the weekends that exercised with Jane Fonda. I was the girl that cared about clothes, makeup, shopping, & style. Now, my attire is strictly Berry Patch T-shirt’s-which we sell at a very reasonable price (got to do a plug when I can). I cared that my hair was washed everyday, now I’m not able to do that because of Jack’s neediness. Getting my eyebrows done every other week was never missed, now it’s like every two months. I cared about decorating my futon/porch for every single occasion. I don’t even really care to watch QVC any more & that was a big thing for me-Lee is definitely happy about that change. I used to visit with family, that is one that miss the most. Those times have come & gone. The opportunities to do any of the above has drifted away.

This week, Jack has gotten involved with other scammers. He has demanded iTunes, Amazon, & Google Play cards for the fools on the other side. We also think they tried to talk him into stealing my Mama’s cellphone information so they could hack into it. Along with all of this, he also wanted his birth certificate & wanted to know where he was born. I gave a fictitious place of birth. He called the durn courthouse trying to inquire about obtaining a birth certificate. Then, he called our local bank & inquired about opening an account. Thankfully, the teller knew me & messaged me right away with this information. She later told Jack he had to be 21 to open an account. Crisis was diverted…for now. It really seems unreasonable to us that Jack is so problematic. He takes the term “problem child” to a whole new level.

As I type this, we are without power, have been for the last eight hours because of storms. Being without power in Jack’s presence, is like a crackhead going a week without crack. He has moved from room to room, blown out candles repeatedly & relit them (yes, I was able to find the lighter), moved candles around ripping wax along with way, carted the portable lights all through the house, & blinded us all with the flashlight. 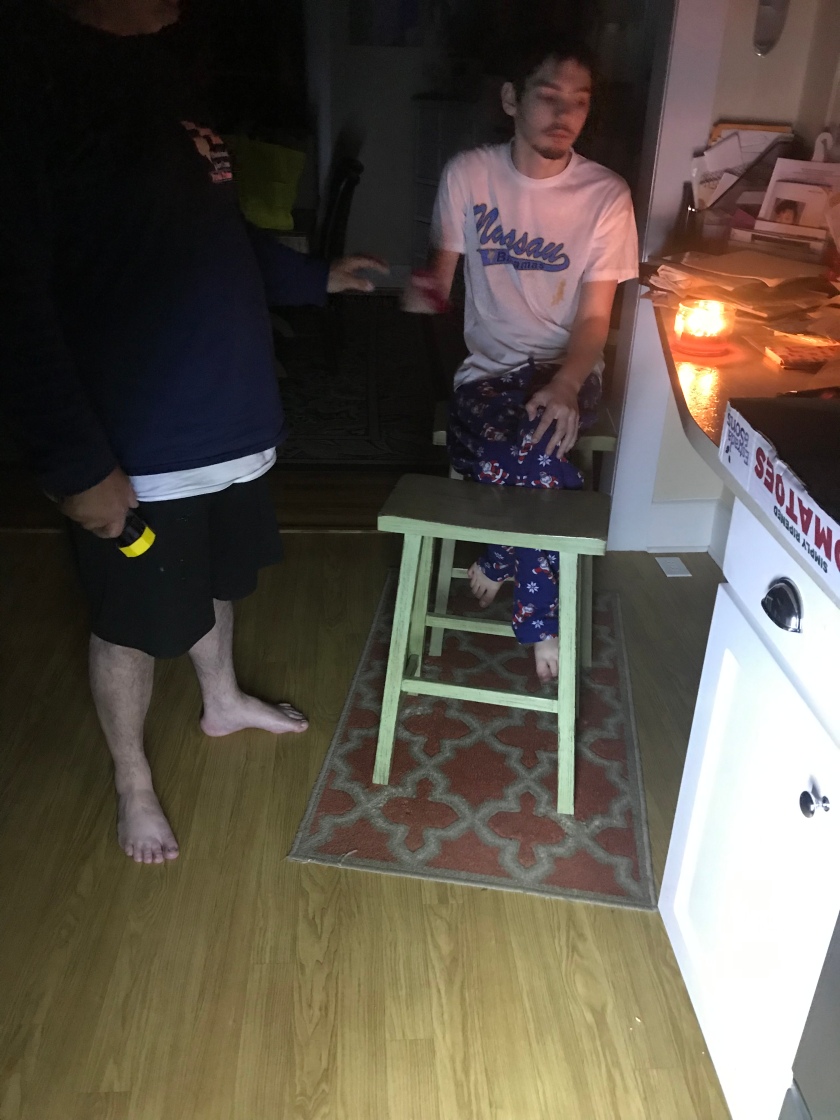 In the south ever since September of last year, we have been swamped with rain, I’m talking days & days of consecutive heavy downpours of wetness. Most of y’all that read my blogs know that Lee (husband) is a farmer. Our big crop is strawberries. Rain is the absolute worst enemy for the red jewels. Lee grew the largest crop of berries ever this year & we have had to trash a huge percentage of strawberries due to water damage from all of the rain. Just this week, he laid special plastic at a cost of around $8,000 in order to raise crops like squash, cucumbers, & tomatoes only to have the rain wash the rows of plastic away. Farming is a gamble, we’ve been through hail storms, tornados, & dry spells, but never in the frame of mind Lee & I are currently in. When we trash berries that were supposed to sold to customers it hurts, when combined with the tragedies of our home life, it really gets us down. As I mentioned, Jack has been worrying us all week long for various gift cards to give to some worthless nut which always hurts. When he calls during the state of mind we’ve been in about the loss of strawberries, it makes you crazier. Here we are trying to pay our bills & Jack gets hooked up with a scammer every other day that is stealing from us. Purely sickening!

Jack has also had a few seizures in the last week. His seizures were under the best control ever for the last year, so I decided to try to wean him from one of his meds because they each have behavioral side effects. This was a wean I worked on for over six months & almost made it. Jack was completely off Topamax for three weeks, but was restarted due to the increase of seizures. The recovery after the last few seizures he’s had has been very difficult. He has become aggressive about an hour after the seizure. The last seizure, he started kicking me hard & squeezing my arm. I was so terrified. During the recovery period, he is not easy to deal with, I only hope the aggression was a result of not having the support of Topamax.

Lee & I often wonder what Jack is going to get into next. It’s so hard to wrap our minds around all of the crazy things he has gotten involved in & has learned. It is crazy to imagine someone else taking care of Jack, but I have to wonder if God isn’t allowing all of this to happen with Jack in order to soften the blow of him going into residential care?

2 thoughts on “The person I never thought I’d become”