Ava always tickles me when she shares a story with me, her favorite phrase while storytelling is “and then”. I pick at her all the time about it, how coincidental that Ava’s favorite phrase has become the title of this blog-I guess the joke is on me! My stories about Jack often involve the phrase “and then” also. It seems like when I tell someone about the events that have taken place in merely one day about him, “and then” is used a dozen times or more (like mother like daughter). Jack had a wonderful few weeks recently, it was pure bliss. Slowly but surely though, signs of a bipolar storm have been brewing. The term is called “storming”, this is when bipolar stricken people go south-all the bad behaviors creep back in.

This past Wednesday, Jack started showing signs of the “storm” by getting involved in chatrooms again. When he is not storming, the chatrooms are a no-go. He’s more into games, watching movies, & talking with us. As the chatrooms return, other negative behaviors re-enter our atmosphere; sassiness, instant demands, not sleeping, aggressive behavior, clawing like a tiger, doing potentially dangerous things, speed talking, zero regard for others, extremely loud music, & way more (seriously). I never tell Jack about appointments until the day of because he gets so anxious & worked up about them & has time to think of reasons why he shouldn’t go. The following day, he woke up early & wild. Wouldn’t you know he had a dental appointment to get his teeth cleaned & a tooth filled. He didn’t know this, but somehow he did intuitively. The child has supernatural powers I have figured out. When I broke the news, he was reluctant but ended up going. While I was doing my chores in the house, I hear Jack on the phone. He called the dentist office! He wanted to speak with his hygienist about why he has a cavity, explain that it’s not his fault, how long he will be there. He is so much smarter than tests show! On the way to the dentist, Jack was really irritable & suspicious. I don’t know about where you’re located, but in our area, every bridge that gets us anywhere is being rebuilt. Our usual route to the dentist was on a detour, because of this & I was interrogated worse than a serial killer by Jack. All went well at the dentist & we headed home.

Jack had arranged for Mama to come stay with him while I went to The Berry Patch after his appointment. He didn’t want Mama’s presence at all while she was there. Lee was doing the farming thing until dark so I had to close the business. Most of you know Jack has a fascination with the guitar Santa (the smartest transgender person ever) brought for Christmas. He also has a fascination of tearing things up. He has intentionally broken the strings on his guitar just to do it & just so he can call a neighbor friend to fix it. Our neighbor is kind of enough to fix it, but I know he is getting sick of Jack & his guitar. He fixed the guitar & tuned it. The very day it was returned, Jack said it needed to be tuned! While Mama was there (Ava was too, PTL), Jack demanded that Mama take him & his guitar to the neighbors house. Jack had just called him & he didn’t answer. Mama told him no, he wasn’t home. Then Jack said he was going to walk to his house. It’s nearly dark & this isn’t an across the street neighbor, it’s a several blocks away neighbor. She tried to reason with him & tell to wait, until I get home. Jack was becoming more demanding about the guitar & irritable since he was not getting his way, he stood up & got his plastic Power Ranger sword & pointed it at Mama. Although plastic, you know if you’ve ever tried to open a plastic wrapped toy or something like a curling iron encased in plastic, that plastic will slice you up, this sword could of potentially done some damage. Jack was putting it all up in Mama’s face. Ava called me in a panic. Thankfully, I was around the corner at Ellerbe’s finest mall, the Family Dollar. Mama was able to diffuse the situation before it escalated further, which never happens, there’s always escalation.

Coleman came home for the weekend later that evening. Fast forward to Saturday morning, Jack woke up like a bull in a china shop. I’ve said this about him many times, but there is literally no other way to describe his morning behaviors. Saturday & Sunday mornings are so very stressful if Coleman & Ava are home. Jack takes every opportunity to aggravate them to no end, they spend the bulk of their morning hours locked in their rooms. I’m always excited when Coleman comes home, he has extended his pallet tremendously. He was cooking scrambled eggs with feta cheese & olives, he is definitely my child-it only took going away to college to confirm it! Jack came barreling through the kitchen, was roaring in his face, clawing his back, & tickling him. Jack’s behaviors to the kids are even more torturous to them than to me. They have no understanding (nor do I) why Jack is like he is. One of the crazier things Jack has done while he has been in a “storm”, is what happened next. Now if you are a reader of my other blogs, you know that we’ve had to hide our scissors & razors since Jack has done foolish things with them in the past (meaning recently). After he terrorized the whole house, I was trying my darnedest to get ready for the day, I hear Jack get something out of the drawer in the kitchen. It’s two screwdrivers. He took the screwdrivers to an electrical outlet in his room & commenced to sticking them in the outlet. I begged & pleaded with him to stop that he could get electrocuted. Nothing I said convinced him otherwise. He told me to shut the door, he didn’t want to be bossed around. And that’s just what I did. There was not anything I could physically do to get the screwdrivers from him without an altercation, so I just backed out of the room & prayed for the best. Jack’s caregiver came soon after & retrieved the screwdrivers for me. I’m telling y’all, we ain’t gonna be able to find anything in our house before long! It took three weeks to find Lee’s electric razor! 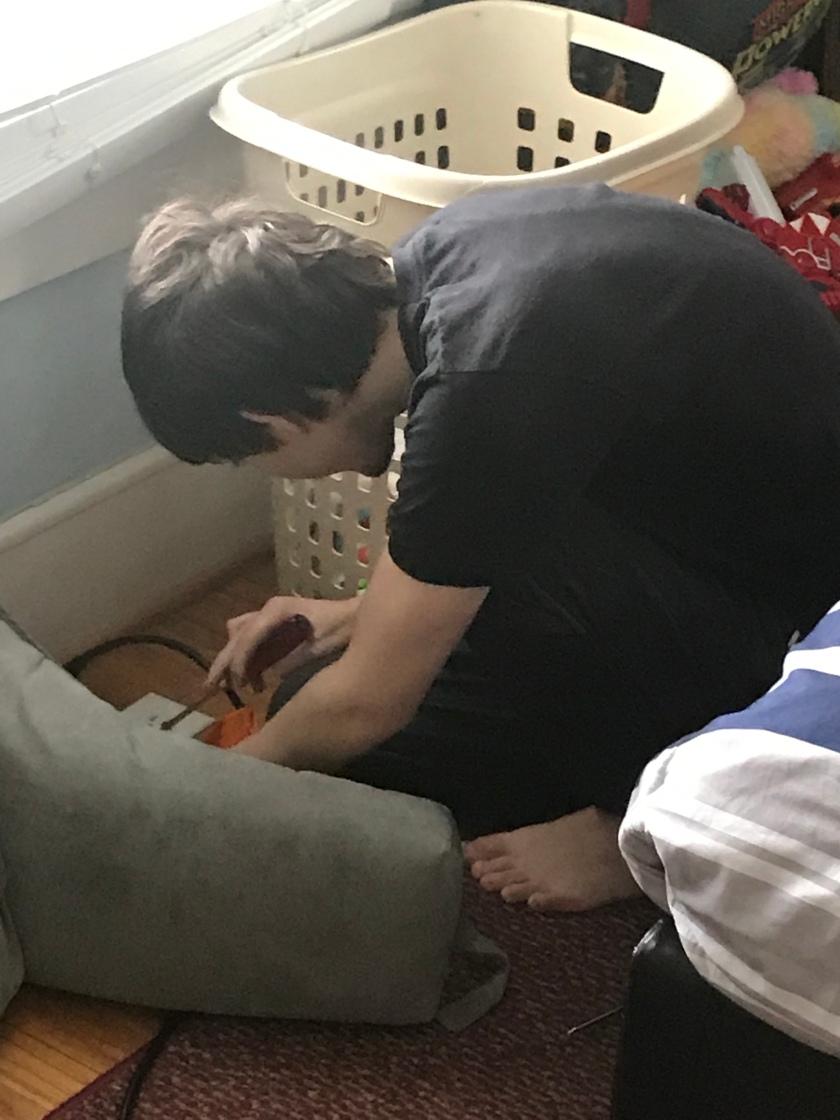 “And then” on Sunday, as Jack’s involvement in the chatrooms intensified, so did the audacious remarks from complete strangers. Jack’s caregiver was messaging me all afternoon with the comments these people were sharing with Jack. Calling him a retard, playing mind games with him by saying they were going to be moving in with him, etc. It is so heartbreaking to think of the cruelty people have towards any person, but especially the special needs community. Moving on to current time & day, I was braiding Ava’s hair tonight. She wanted to sleep with the braids so her hair would be curly tomorrow morning. Jack comes in when I’m nearly done & demands that I stop. He didn’t like the braids. What 17 year old boy would even care about something like that! We uprooted to a different room. I could hear Jack being loud & obnoxious. After Ava got tucked in, I went to shower. Yes, a shower that involved washing my hair. Guess what happened? Jack had a seizure. I was blessed with the senses of a beagle, I knew it, but Lee did not. Lee thought he was pretend sleeping. The build-up to a seizure & the recovery after the seizure are harder to deal with than the actual seizure. His brain gets so amped up before & afterwards it’s like Jack doesn’t know what to do with himself. We can only hope that having the seizure causes a more calm reset of his brain, but even if it doesn’t, at least I got my hair washed!