Around a month ago, I had the pleasure of Jack going to bed around 11:30pm. What a surprise, & to think all it took was an increase in his sleep medicine. We suffered for well over a year in the living nightmare with a lack of sleep & sanity due to what I blame on the trial of CBD oil or Epidiolex. That whole ordeal threw us a major curveball. We were so hopeful that CBD was going to be the answer for Jack & our family. Don’t get me wrong, it has helped many Dravet patients & other chronically ill individuals, it just was not for Jack.

For years, I have told Jack’s medical team at UNC that I think he is bipolar. When I would begin this discussion during his various appointments or hospitalizations, I was given strange looks & flatly told his behavior is 100% due to Dravet Syndrome. I just don’t think so. Jack has so many similarities to that of a bipolar person. It is not unheard of for folks to have more than one medical issue. We’ve all known people to have more than one diagnosis, so why wouldn’t the doctors hear me out & try bipolar meds? His symptoms fit the bill totally-highly excitable, moody, excessive talking, thinking the world revolves around him, down in the dumps, times of under & over eating, sleep issues either not enough or too much, & becoming obsessed with things. Since Jack was 8, I have thought he is bipolar.

During Jack’s last outburst which was in December of 2017 & he was hospitalized, he came home on Trazodone for sleep. It worked okay, not great. Depakote was also added to his long list of meds. His mood was definitely not good, but at least he was not being combative. I really hated to tinker with his meds any more since he is already on so much, but in May, I had had enough. I was staying up to 2-3am every night with him as I’ve stated in previous blogs. I emailed his neurologist who agreed to increase the precious nugget called Trazodone & it has helped in a major way! Since the increase in the dosage of Trazodone, Jack has been out of the house more in the last two weeks than in the last nine months altogether. This increase has been a blessing & a hinderance at the same time. Blessing in that he is becoming more like his old self, going to sleep at a decent hour, become more engaged (way engaging), more interactive, & wanting to get out of the house some. His wanting to get out is sporadic & still only on his terms. I bet you are wondering how any of this could be negative right? Well, with this increase in the Trazodone, he has become obsessed with me & I assume it’s because I am the main caretaker. I can not have any time to myself or with Lee or with Coleman & Ava as long as I am home. We can’t spend time as a family of 5 because Jack aggravates the kids so, they dissipate to their safe place, their rooms. Lee & I are forced to watch Blue’s Clues, Night Rider (yes, the show with David Hasselhoff), or Batman the tv series from the 60’s with Adam West & Burt Ward. We have zero time to ourselves. There is no more watching our favorite DVR recordings such as Below Deck, Diners, Drive-Ins & Dives, or something I recorded on PBS that is interesting for us farmers. Every minute is about Jack. It is great that he has become more active & a little less obsessed with the phone & computer, however, it is annoying because everyone needs time as a couple & to themselves.

How did this medication do this you may ask. Well, Trazodone as it turns out, is a medication that can be used for bipolar patients who suffer from a lack of sleep & Jack just so happens fits the bill. I am beginning to wonder if my theory of Jack being bipolar is correct. This is one of those times you want to stick your thumbs in your ears, wave your fingers, stick out your tongue, & say ‘nah-nah-nah-boo-boo’ to the doctors.

While experiencing this new phase, one night last week I was sitting on the porch trying to steal a few minutes of alone time, but no such luck. Jack comes out at 9:30 & wants to get the paper. To put this in perspective, here’s the story. Our local paper stopped home delivery for us last summer (2017). Jack suddenly wanted to go out & get the paper for some reason. Now this is a task he often did for me everyday. Last week was the first time he noticed there was no longer a paper box in our yard in over a year! It’s so hard to believe the changes we’ve seen in this young person in his few years. On that night Jack went to get the paper, he also wanted to ride to Carroll’s Pantry which is a convenience store in the area. He wanted a drink. We rode to get one & then I rode out to our local baseball/softball field in town & there was a game. I love to watch & play ball, so we pulled over & watched a little of the game. He wanted to get out, but I was too afraid the crowd & excitement would be too much. Jack & I stayed out for a whole hour that night! While writing this paragraph, I am reminded of the book, ‘If You give a Pig a Pancake’. I swear I’m going to write an adult comedic version of that story one day titled “If Jack comes out of his Room’.

So tonight Jack wanted to go to Sonic. He had this planned out to sit behind me so he could get out of the car & press the Sonic red button to order & swipe my card. Pressing buttons is highly important to our children (think they may of gotten that from me), I always wanted to work at the Food King grocery store when I young…something about pressing those buttons on the cash register intrigued me. After the order was placed, card swiped, he got in the front seat & prepared to chow down. 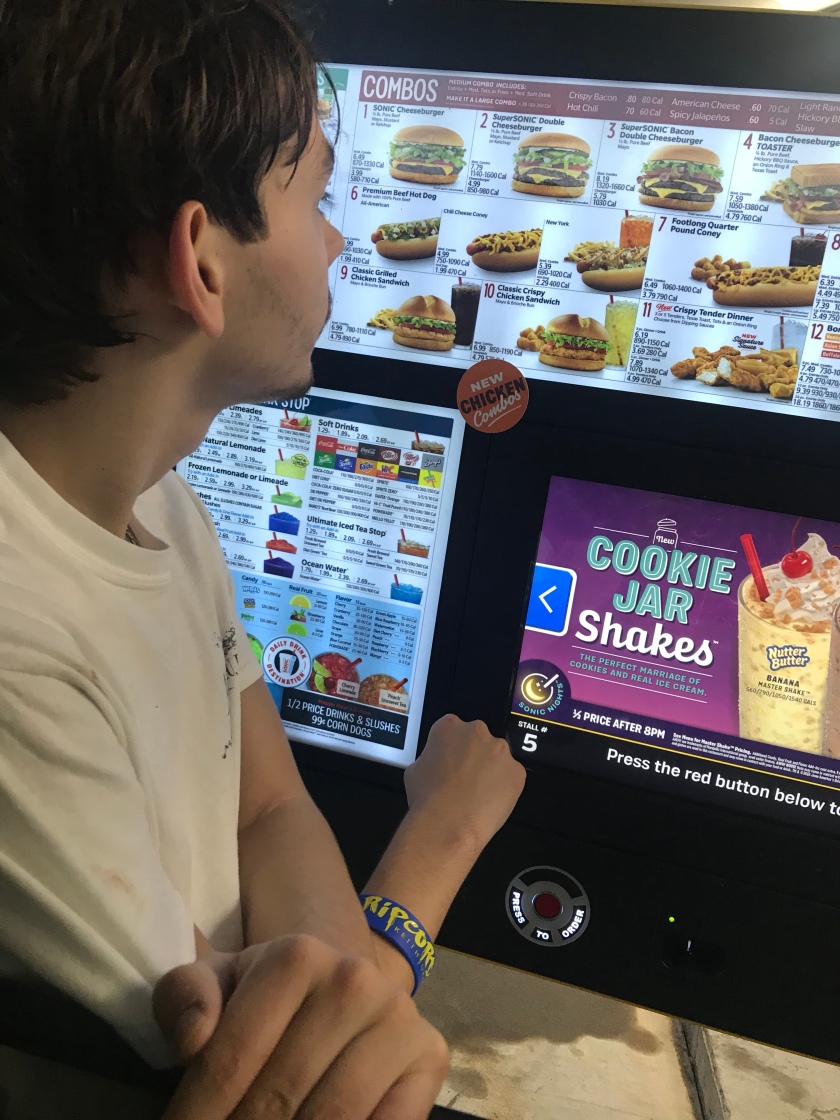 This week, Ava attended a local camp. Jack got a wild hair the day before she was due to come back home. He looked the number up & called them! I heard him talking to someone in the office about giving his sister Ava a message to make him something while she’s at camp. This is a smart kid, makes you wonder what he would do with his life if he were a regular kid. He is a savant in many areas. He knows many facts about celebrities (mainly dead ones), old music, dinosaur facts, things about countries most have never even heard of. He even bought a British flag for us to hang outside of his window-which was a purchase prior to the Harry/Megan mayhem.

This life is ever-changing, it’s difficult, hard, funny, weird, sad, aggravating, & everything in-between, I just never thought we would go through the changes Jack has experienced so deeply. Maybe we needed to go through all that chaos to get to this point. For now, we accept this change & look at it in a positive light…mostly.